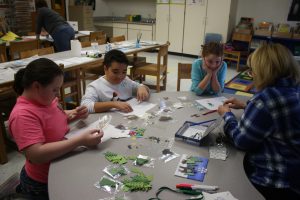 The NYSED released the results of these new accountability measures on Jan. 17, after a two-year-long data gathering process.

“I am pleased with our results from the ESSA,” Superintendent Tammy Mangus said. ”They show the effectiveness of our amazing team and the progress we have made.”

ESSA replaces No Child Left Behind, and these designations are the first indication from the state of how schools are performing based on the new measurements of academic success under ESSA. These designations are based on student data from the 2017-18 school year compared to baseline data from 2016-17. These comparisons were used to establish growth targets for the next five years.

Districts received their preliminary designations for each school and the district in November 2018 from NYSED. Districts were given the opportunity to appeal the designations.

Later this spring, the state will identify high performing or rapidly improving schools as Recognition Schools and Recognition Districts.

The seven indicators used to measure student performance, participation and progress are:

93% of parents agree: parental involvement is effective at MCSD

In addition to the positive results of these seven indicators, the district also scored well on its NYSED parental involvement survey.

According to the NYSED website, the goal of this survey is to determine the percentage of parents with a child receiving special education services who report that schools facilitated parent involvement as a means of improving services and results for children with disabilities. In Monticello, 93% of respondents agreed with statements suggesting a high level of effective school-parent engagement.

“This is a district comprised of innovative educators, administrators and professionals who have intentionally worked to build a system of  academic and social/emotional supports to ensure that each and every Monticello student reaches his or her full potential,” Ms. Mangus said. “Those of us who work with our students have the privilege of witnessing firsthand how these supports have had a positive impact on our kids, and these evaluations confirm that this holistic approach has had a tremendous influence on academic growth and achievement.”