Third, fourth and fifth grade students at KLR were able to show an

appreciative audience just what they are learning in music class by singing, playing instruments and performing at the mid-winter concert.

Each grade performed five songs. Third graders performed “Hello Song” in two languages along with other traditional tunes. The fourth-grade students ended their set with “We Are the Hope of the World.” When it came time for the fifth-grade performers, they didn’t disappoint, performing partner songs “Old McDonald/Bingo” and “In the Hall of the Mountain King,” 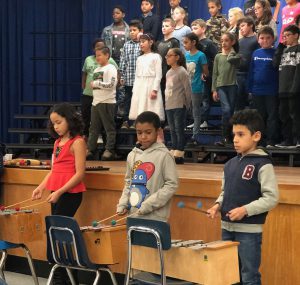