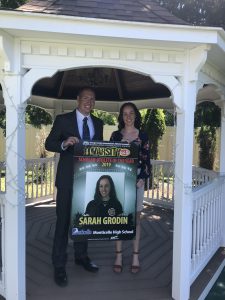 During the Orange County Interscholastic Athletic Association’s (OCIAA) annual scholar athlete senior breakfast, Monticello High School senior Sarah Grodin learned she had yet another accolade to add to a year of triumphs and accomplishments – she was named as one of the organization’s two Scholar Athletes of the Year.

In the past year, Sarah, who runs cross country and outdoor track and also competes on the Monticello ski team, has shattered numerous athletic record and been recruited to run track for West Point, all while maintaining a 98 percent grade point average and participating in a host of extracurricular activities, including jazz band, the interact club and honor society.

“It was definitely an honor to receive [this distinction],” Sarah said. “It was a total surprise; no one had told me anything about it. It was really nice.”

Although the school year is starting to slow down for many students, Sarah is continuing forward at full speed (no pun intended). Next week, she will head to Greensboro, North Carolina to compete in the New Balance National Outdoor, a national championship that she qualified for after competing in the New York state qualifier.

At West Point, Sarah will trade in her blue and white for gold and black, running track and cross country for the Army Black Knights. She plans to study to become a surgeon in the United States Army, a path she chose after participating in the Sullivan County BOCES’s New Vision Health Program in her junior year.

“Sarah’s tenacity and dedication to her sports, her studies and her country is inspirational,” Superintendent Tammy Mangus said. “I know that she will continue to accomplish great things at West Point and beyond. We are so proud of her.”