On Feb. 22, 2019, nineteen students from the Academy of Finance traveled to 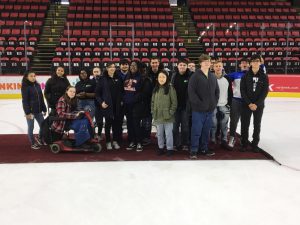 Binghamton to attend the “FBLA (Future Business Leaders of America) Day with the Binghamton Devils” at Floyd L Maines Arena. We learned about the arena business and managing a hockey arena.

Initially, we took a tour of the arena and saw all the areas that make up the arena. The students went out onto the ice and realized getting that tiny puck into the goal is not so easy. They each took a few shots into the goal using hockey sticks provided by the tour guide. 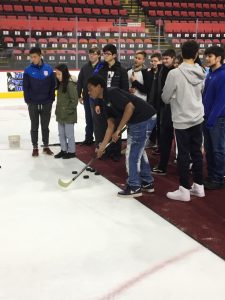 Following the tour, we heard from various employees regarding their role in the organization. Those roles ranged from temperature regulation in order to keep the ice frozen, what happens when an event other than hockey is booked at the arena, such as basketball or a concert, ticket sales, merchandise ordering and security and safety of the crowd.

Following those presentations, the group traveled to Binghamton University where we took a short tour and sampled their marketplace dining.

After Binghamton, we traveled back to the arena to see the Belleville Senators defeat the Binghamton Devils by a score of 5 – 3. It was not only a great learning experience but all had a great time.